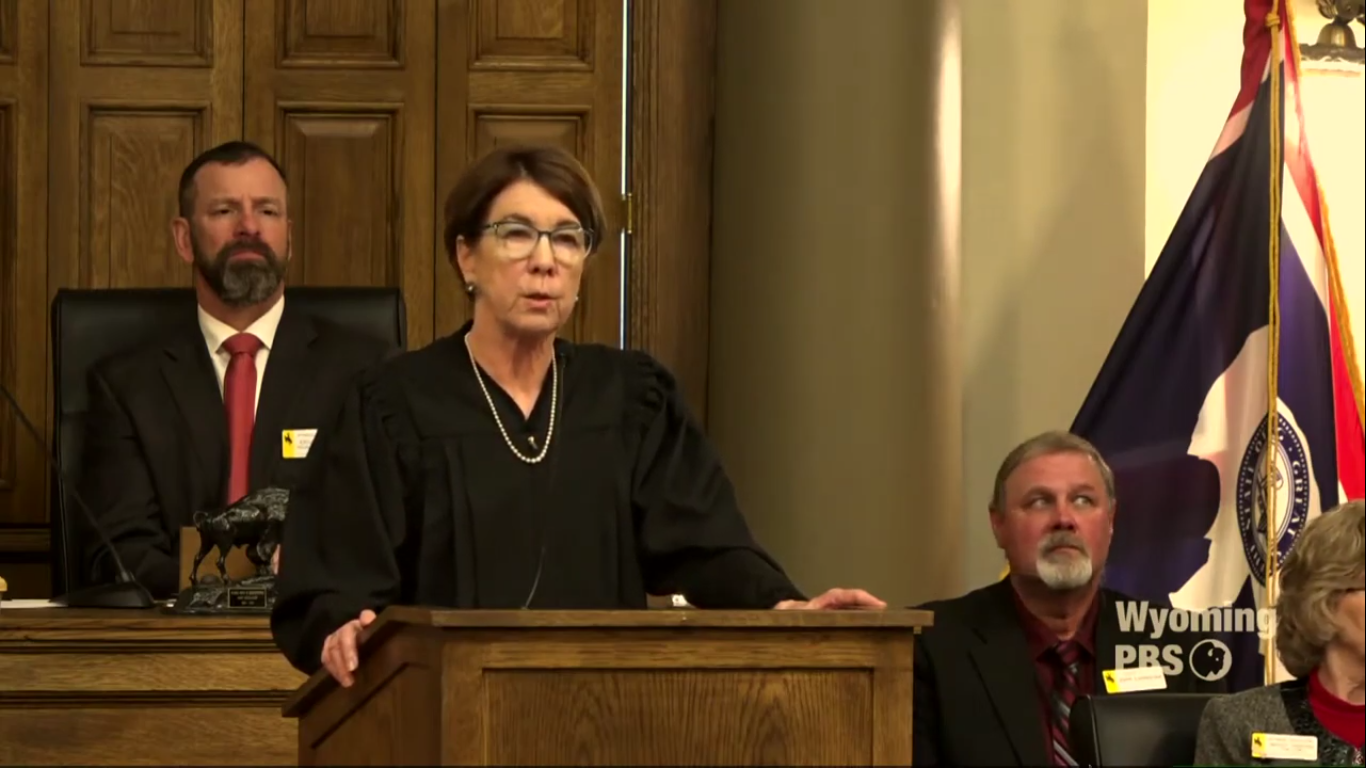 CASPER, Wyo. – Wyoming Chief Justice Kate Fox told the Legislature during her “State of the Judiciary” message on Monday, Feb. 14 that the judiciary is struggling to retain staff and that the main reason was the salary.

Fox said Wyoming has 24 circuit judges, 24 district court judges and five Supreme Court justices along with several magistrates and the judiciary employs about 265 people to support the work of judges.

“They work incredibly hard and I have to tell you, we’re having a hard time retaining our good people,” Fox said. “There are several reasons for this, but the main one is that they are underpaid.”

Fox specifically pointed to the difficulty in retaining circuit court clerks whom she described as the “workhorses of the judiciary.” The approximately 120 circuit court clerks work in the “busiest courts where small claims and torts are filed — often by people who are not represented by attorneys,” according to Fox.

“Clerks are there to help your constituents, the citizens of Wyoming, and to support the work of the judges so that the legal issues of the people can be addressed. [in a] timely [manner]”, Fox told the legislature. “It breaks down when we can’t keep our good people and we can’t keep them because they can make more money at McDonald’s or even in the same building, by working for the county.”

Fox said it was also difficult to retain the small team of judiciary administrative staff who help maintain the courts’ computer systems and who are essential as the state strives to modernize the justice system. She said the judiciary is struggling to retain these staff as they move into private sector jobs.

“We must pay our people a fair wage if the courts are to continue to perform our constitutional duties,” Fox said. “This is to provide a fair, timely and inexpensive resolution of our citizens’ disputes.”

Fox said the judiciary supports Gov. Mark Gordon’s proposal to include funding in the new budget to bring state employee salaries closer to all agencies in the marketplace. Gordon himself said during the “State of the State” on Monday that improving compensation for state employees was his top priority as the Legislature convenes its 2022 budget session.

Fox said budget cuts implemented in 2021 eliminated three positions in the judiciary and “we need them back.” She added that the judiciary is proposing to use some funds from the American Rescue Plan Act to bring these positions back, even if it means that funding for the positions is only available in the short term.

“We need these three positions to adequately serve the people of Wyoming … and to retain the good people we have who are frankly burning out.”

The judiciary is also requesting temporary training staff to help court clerks become familiar with the new case management system being implemented in Wyoming courts. Fox added that the judiciary sees “ever-increasing demands for data” and that many of those demands are legislated. While she said the judiciary agrees on the importance of data, “strong data starts with reliable, consistent data and we need trained people to do that.”

Fox said he has noticed that executive branch agencies that work closely with the judiciary also suffer from a lack of resources. She pointed to the Wyoming Department of Family Services where several different social workers seem to testify in cases that Fox says would be best served with a consistent case manager.

“It’s never a good thing to have multiple social workers in the life of a case that requires building relationships with families and figuring out what their specific needs are,” she said.

She added that treatment court programs work closely with probation officers in the Wyoming Department of Corrections and that budget cuts within that department have resulted in probation officers having less time to devote than judges. would not like.

Fox said she doesn’t want to criticize agencies like DFS, DOC, the Wyoming Department of Health or law enforcement and believes those agencies are doing the best they can with limited resources.

“Cutting government sounds good until you cut services to the citizens of Wyoming to such an extent that basic structures crumble,” Fox said. “Left unattended, the cost down the road will only be higher.”

Fox added that a top priority for the judiciary is to add three additional district court judges, noting that caseload studies indicate Wyoming’s third, seventh and sixth judicial districts are short of a judge. district court “for many years”.

She said the addition of a district court judge in each of these districts would help ensure that residents of Natrona, Campbell, Crook, Weston, Lincoln, Sweetwater and Unita counties receive the services offered by the courts of district they deserve. Fox noted that the Legislature’s Joint Judicial Committee is sponsoring a bill to add those three judges and that each judge with a staff of three adds $1.2 million per biennium to the budget.

Fox said she was proud of the overall quality of Wyoming judges, but saw “a big problem looming,” adding that the judiciary is seeing fewer candidates applying to fill vacancies.

“I think they don’t apply because they see how difficult and relentless this job is,” she said.

Fox said she would not ask the legislature to fund additional district court judges if she did not believe it was necessary.

Fox said circuit courts across the state have moved to the new case management system, but they don’t yet have e-filing and funding for e-filing is a top branch request. legal proceedings for the use of American Rescue Plan Act dollars.

District Courts have started to transition to the new case management system with three District Courts on the new system. Fox said this is important because the move to the new case management system allows the move to e-filing to happen eventually. She noted that e-filing should be ready in a district court this summer and that the roll-out to all district courts should be complete by 2025.

Fox added that Wyoming’s new chancery court opened Dec. 1, 2021. Until there are enough filings to warrant a full-time chancery judge, two district court judges help with this burden. Fox said the new Chancery Court courtroom in the new state office building in Casper should be ready for operation in the coming months.

Fox added that the judiciary hopes to secure funding to upgrade the Supreme Court’s appeals case management system. She said funding for this upgrade was approved by the legislature in 2020 but was cut in 2021.

She said the Council on Judicial Policy and Administration launched an effort this month to explore reform and modernization of Wyoming’s judiciary.

Fox noted that the budget requested by the judiciary for the 2023-2024 biennium is approximately $91.9 million, which it says equates to approximately 3% of the general fund of the overall judiciary budget. ‘State.