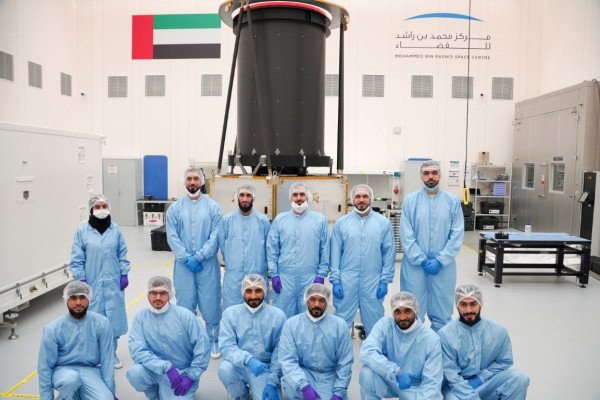 DUBAI, December 21, 2021 (WAM) – The Mohammed Bin Rashid Space Center (MBRSC) today announced that it has completed the critical design review of MBZ-SAT, the region’s most advanced satellite in the field of high resolution satellites. imagery. The team will now begin preparations to develop and manufacture the MBZ-SAT flight model.

The Critical Design Review (CDR) is the latest multidisciplinary technical review aimed at ensuring that the satellite can move on to manufacture, demonstration and testing and can meet stated performance requirements within the limits of cost, schedule and time. risks. The final satellite design weighs over 800 kg and is one of the largest and most advanced satellites to be developed in the United Arab Emirates.

MBZ-SAT has played a vital role in supporting the local space industry, with 90% of the mechanical structure and 50% of the electronic modules being built in the United Arab Emirates. The MBRSC has actively engaged with regional companies with the aim of creating a local hub for space-related manufacturers. It has also partnered with local companies to manufacture and supply the components for MBZ-SAT.

Salem AlMarri, Managing Director of MBRSC, said: “The successful completion of the critical review design of the MBZ-SAT marks another milestone on our journey towards launching the region’s most advanced satellite in 2023. L he team did an outstanding job, exemplifying the expertise, skills and abilities of Emirati scientists and engineers. We are also proud to have the UAE private sector involved in the development of the MBZ-SAT, thus helping to play a vital role in the advancement of the project. We will now focus on the next steps of the mission, which promises to be another leap forward for the UAE’s space ambitions. “

Amer AlSayegh AlGhaferi, Senior Director of Space Engineering Department and Director of MBZ-SAT, MBRSC said: experts. The review confirmed that the satellite was ready for the next phase, namely the development and manufacture of the flight model that will be launched in 2023.

MBZ-SAT, which is the second Emirati satellite built by a team of Emirati engineers after KhalifaSat, will be equipped with a 24-hour automated image organization system, ensuring that it delivers the highest quality standards in terms of satellite images. intended for commercial use worldwide. The satellite will improve the resolution of image capture by more than double compared to the system launched previously. It will also increase the downlink data transmission speed by three times the current capacity. MBZ-SAT’s fully automated image planning and processing system will also be able to produce more than 10 times the images currently produced by the Center.

“The misuse of data is a bigger problem than the manipulation”