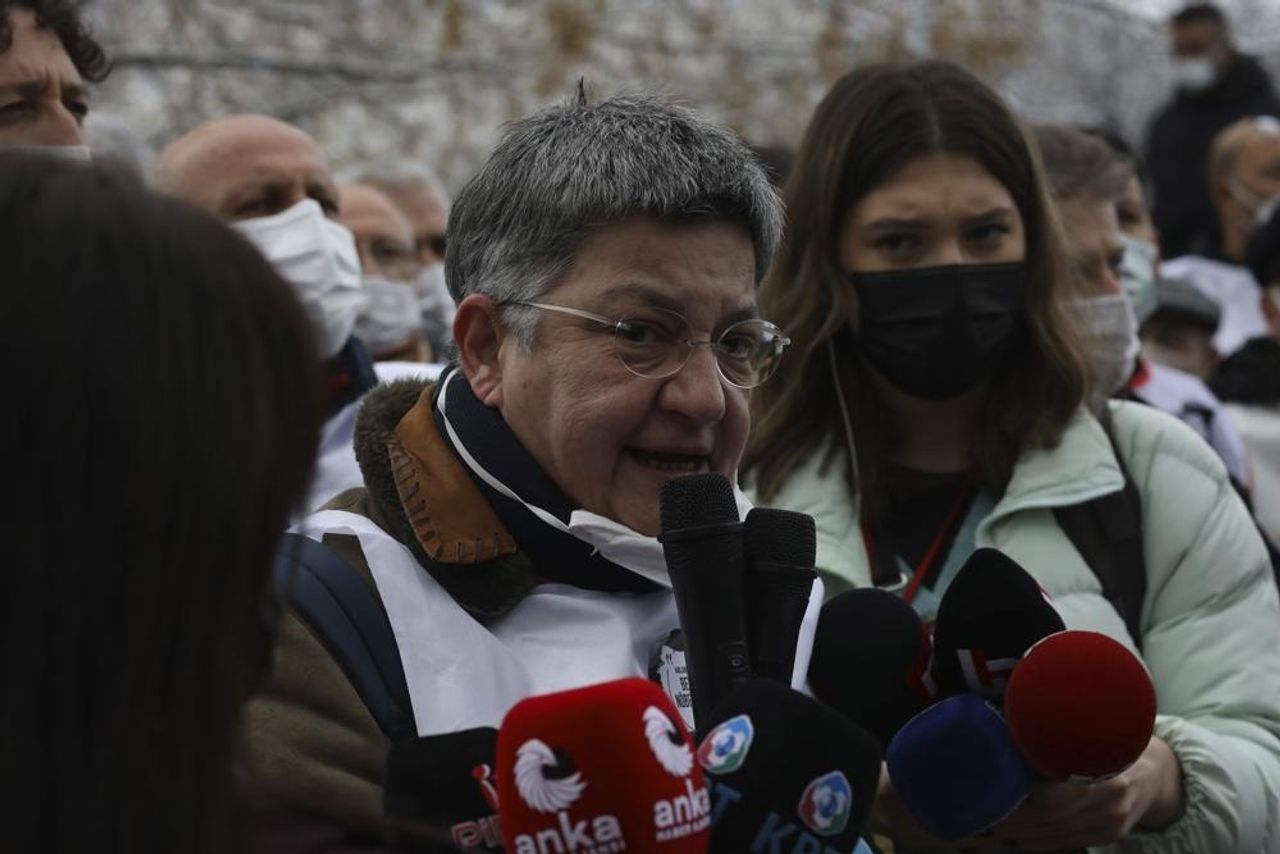 Erdoğan orders the arrest of the head of the Turkish Medical Association: hands off Fincancı!

The police detention of Professor Dr. Şebnem Korur Fincancı, President of the Turkish Medical Association (TTB), from her home in Istanbul yesterday is an attack on basic democratic rights. The World Socialist Website protests against his arbitrary detention and calls for his release.

Fincancı’s detention prompted protests in many cities, including Istanbul, Izmir, Diyarbakır and Adana yesterday. The TTB’s Central Council issued a formal protest, saying: “The detention decision, which follows statements from government circles interfering in the justice system, is the latest step in the pressure that these circles have increased against the TTB. and all labor and professional organizations for a long time.”

He claimed that the government of President Recep Tayyip Erdoğan aims to bring the TTB under its control: “In fact, the government has admitted that it will use this agenda created in public opinion for an amendment to the law on professional organizations “.

Last week, Fincancı, a forensic scientist and elected head of the TTB, whose membership includes more than 100,000 doctors, said Medya Haber of the alleged use of chemical weapons by the Turkish Armed Forces (TSK) in their ongoing operation against Kurdistan Workers’ Party (PKK) forces in Iraqi Kurdistan. On October 18, the pro-PKK news agency Fırat News Agency (ANF) published images of two PKK militants who were allegedly exposed to chemical weapons by the Turkish military.

In an interview with Medya HaberFincancı said that she looked at the footage, adding: “Obviously, one of the poisonous chemical gases that directly affects the nervous system was used. Although its use is prohibited, we find that it is used in conflicts.

The Ankara Attorney General’s Office took immediate action on the instructions of the Erdoğan government to investigate Fincancı. In a statement, he said the investigation had been opened “to … make propaganda for a terrorist organization and … insult the Turkish nation, the state of the Republic of Turkey, institutions and state organs due to his statements to the so-called media organ of the PKK/YPG armed terrorist organization, he also demanded that Fincancı be removed from his position as chairman of the TTB.

Talk to bianet on the same day, Fincancı criticized Medya Haber, stating: “I criticize the way in which my remarks were presented; it was irresponsible reporting. …I stated that these involuntary movements could occur with the effect of a chemical taking over the nervous system and that an effective investigation should be carried out into this matter if there were allegations that a product chemical was used.

Fincancı continued, “I stated that if there is a death, it is necessary to do a medical investigation according to the Minnesota Protocol and it is mandatory that the investigation be carried out by independent institutions since this is considered a war crime within the scope of the Geneva Convention. However, the news presentation indicated that I had proven this incident, so it was not reflected very correctly.

“Opening an investigation to someone who says ‘we must investigate’ gives the impression of covering up a crime,” she said. However, Fincancı has been targeted by the government and the corporate media, despite not having any criminal offences, and was arrested yesterday after her home was searched, despite having previously declared herself ready to testify.

The TTB has organized many nationwide strikes for better pay and conditions this year. Moreover, Fincancı and the TTB have also been in the government’s crosshairs due to its opposition to the government’s concealment and manipulation of pandemic data.

Until recently, the TTB opposed Erdoğan’s “herd immunity” policies that put profit before human life. Fincancı also drew attention to this in the interview, saying, “We were also criminalized as a professional organization during the pandemic process when we said, ‘Your data and the data we compiled on the terrain do not coincide”. Human rights defenders are constantly criminalized. It is therefore not surprising that an investigation has been opened…”

On October 18, the Kurdish nationalist Peoples’ Democratic Party (HDP) brought the alleged use of chemical weapons to parliament and demanded an investigation. But the Ministry of Defense quickly denied these allegations. “There are no chemical weapons in the inventory of the Turkish Armed Forces,” Turkish Defense Minister Hulusi Akar said on Friday. “We respect the borders and sovereign rights of all our neighbours, especially Iraq and Syria,” Akar said in the same speech.

In reality, the Syrian and Iraqi governments are demanding that Turkey withdraw its armed forces from their territory.

On the same day, Erdoğan declared that his government would prosecute Fincancı, stating: “My friends immediately sued [against her] and we certainly won’t let that pass. We will pursue it by opening both compensation and serious criminal cases. Our armed forces have never had negligence such as the use of chemical weapons.

Remarkably, Erdoğan also claimed that these allegations were “slander against the communists”, stating: “It is not the first time that they have made these slanders. They are impudent, they are immoral. It’s the mud they always throw at our army. They think that if they throw mud, it will leave a mark. This [slandering] is the most important motto of communism and communists. Since these are their remains, they will always launch such slanders. And we will hold them accountable for that under the law, no matter what.

On Sunday, Devlet Bahçeli, the leader of the MHP, the fascist ally of the Erdoğan government, called Fincanci “a terrorist and a criminal”. He said: “Anyone who clings to the slander of the separatist terrorist organization PKK and accuses honorable Turkish soldiers is a terrorist, a dishonourer, a traitor and a criminal.” On Tuesday, Bahçeli also called for closing the TTB and stripping Fincanci of Turkish nationality.

The TTB was also targeted by Erdoğan in early 2018. Eleven members of the TTB’s central council were arrested for issuing a statement opposing the war, titled “War is a matter of public health”, after the invasion of Ankara in northern Syria against the United States. supported by the Kurdish nationalist People’s Protection Units (YPG) around Afrin. Before these detentions, Erdoğan had declared them “traitors” and “lovers of terrorists”.

In Iraq, where allegations of the use of chemical weapons have been raised, the Turkish army has been carrying out military operations called “Claw” against the PKK since 2019. After Operation Claw Lock began in April, Iraq’s central government and Kurdistan regional government blamed Turkey for a July bombardment that killed scores of civilians. Ankara, however, denied the allegation, implicitly blaming the PKK for the attack.

The detention of the TTB chairman comes as the government steps up its attacks on democratic rights amid growing social discontent over the cost of living. Amid ongoing military operations in Iraq and Syria and growing tensions with Greece in the Eastern Mediterranean, the Turkish government is promoting militarism to quell and deflect class tensions.

Moreover, a so-called censorship bill openly targeting all sorts of political and social opposition has recently been passed. It asserts that “the public dissemination of false information on social networks concerning the internal and external security of the country, public order and public health with the aim of creating fear and panic among the public in a manner conducive to disturb the public peace shall be liable to a prison sentence of one to three years. »

The day before Fincancı’s arrest, nine Kurdish journalists working for the Mesopotamia Agency (MA) and JINNEWS were arrested. Ankara’s security leadership shared footage of the arrested journalists in handcuffs, saying the journalists worked as part of the “press committee of the PKK/KCK terrorist organization” and “reported content inciting hatred and hostility among the public.” Last June, 16 journalists were arrested during another anti-democratic police operation against the Kurdish press. They are still being held in prison without charge.

The growing attacks on freedom of speech, freedom of the press and arbitrary detentions underscore once again that democratic rights cannot be defended without opposing war. This requires the mobilization of the working class, the only social force capable of defending democratic rights, on the basis of an anti-war and international socialist program.

Sign up for the WSWS newsletter for healthcare workers!