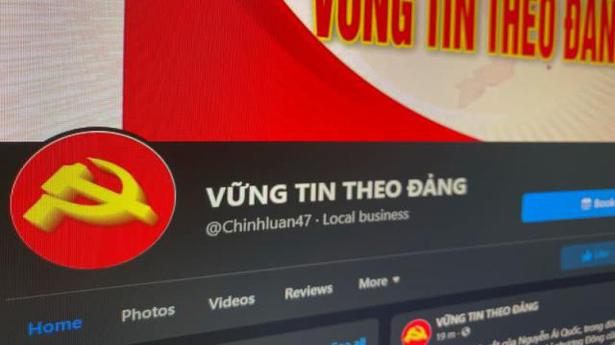 Social media researchers say the group may be Southeast Asia’s largest and most sophisticated influencer network. And he is now playing a leading role in escalating the conflict between the country and Facebook.

In Vietnam, where the state is waging a fierce online battle against political dissent, social media “influencers” are more likely to be soldiers than celebrities.

Force 47, as the Vietnamese Army’s online information warfare unit is called, consists of thousands of soldiers who, in addition to their normal duties, are responsible for creating, moderating and posting to pro-state Facebook groups, to correct “mistaken views”. online.

According to a Reuters review of provincial-level state media reports and broadcasts by the Army’s official TV channel, Force 47 has, since its inception in 2016, set up hundreds of groups and Facebook pages and published thousands of pro-government articles and messages.

Social media researchers say the group may be Southeast Asia’s largest and most sophisticated influencer network. And he is now playing a leading role in escalating the conflict between the country and Facebook.

After being approached by Reuters this week, a Facebook source said the company had suppressed a group called “E47”, which had mobilized military and non-military members to report posts they did not like on Facebook in the purpose of having them removed. . The source said the group was connected to a list of Force 47 groups identified by Reuters.

A Facebook spokesperson confirmed that some groups and accounts were deleted Thursday for “attempts to coordinate to report content en masse.” A source from the company said the action was one of Facebook’s biggest takedowns under its mass reporting policy.

But many Force 47 accounts and groups identified by Reuters remain active. Since they are operated by users under their real names, they do not violate Facebook policies, the company source said.

The Vietnamese Foreign Ministry, which handles inquiries made to the government by foreign media, did not immediately respond to a request for comment on the withdrawal.

Unlike neighboring China, Facebook isn’t blocked in Vietnam, where it has 60 to 70 million users. It is Vietnam’s leading e-commerce platform and generates around $ 1 billion in annual revenue for the company.

It has also become the main platform for political dissent, launching Facebook and the government in a constant struggle to remove content deemed “anti-state”.

Vietnam has undergone sweeping economic reforms and social changes in recent decades, but the ruling Communist Party maintains a tight grip on the media and tolerates little dissent.

Last year, Vietnam slowed down traffic on Facebook’s local servers until it agreed to dramatically increase censorship of political content in Vietnam. Months later, authorities threatened to shut down Facebook completely in Vietnam if it didn’t locally restrict access to more content.

In a statement to Reuters, a Facebook spokesperson said the company’s goal is to keep its services in Vietnam online “so that as many people as possible can express themselves, connect with friends and manage their business “.

“We have been open and transparent about our decisions in response to the rapid increase in attempts to block our services in Vietnam,” the spokesperson said.

“This paved the way for Facebook to become Force 47’s platform of choice for protecting the party line, shaping public opinion, and disseminating state propaganda.”

There is no official definition of what constitutes a “mistaken view” in Vietnam. But activists, journalists, bloggers and – increasingly – Facebook users, have all been sentenced to heavy prison terms in recent years for disseminating “anti-state propaganda”, or opposing views. to those promoted by the Party.

Last week, Le Van Dung, a leading activist who regularly broadcasts live to thousands of Facebook followers, was arrested after more than a month on the run, according to a police statement.

Dung, who calls himself “Le Dung Vova”, was arrested for “making, storing, disseminating information, materials and objects for the purpose of opposing the state”, under the Article 117 of the Vietnamese Penal Code.

He faces up to 20 years in prison if convicted.

Force 47 takes its name from Directive 47, a policy document released by the Army’s General Political Department on January 8, 2016. Analysts say it was created as an alternative to hiring “shapers.” opinion “civilians – or” luan vien “- who had operated on a smaller scale and with less success.

“As the ‘du luan vien’ were not as well trained in party ideology or as conservative as the military officials, their performance was not as good as expected,” said Nguyen The Phuong, researcher in Saigon. Center for International Studies. “Force 47 is also less expensive. Military officials see it as part of their job and don’t ask for compensation.”

The size of Force 47 is unclear, but in 2017 the general in charge of the unit at the time, Nguyen Trong Nghia, said it had 10,000 “red and capable” members. The real number could be much higher: Reuters’ examination of known Force 47 Facebook groups showed tens of thousands of users.

The Facebook source said the E47 group he had taken action against was made up of active members of military and non-military members.

Nghia now heads the main propaganda branch of the Party. Vietnam’s Ministry of Information recently promulgated a social media code of conduct that closely resembles Force 47 guidelines, urging people to post “good deeds” and prohibiting anything that affects “the interests of the United Nations. State”.

In March, conferences were held at military bases across Vietnam to mark five years since Force 47 was created.

According to a Reuters analysis of these groups, state media on the meetings named at least 15 Facebook pages and groups controlled by Force 47, which collectively had more than 300,000 subscribers.

Rather than being a single unit of the military, Force 47 soldiers appear to run their activities alongside their regular duties and create locally targeted content, reports have revealed.

YouTube said it terminated nine channels on Friday for violating its spam policies, including a channel identified by Reuters as a suspected Force 47 operation.

Twitter said it had not seen any Force 47 activity.

Many Facebook groups reviewed by Reuters have played on patriotic sentiments with names such as “I love the Socialist Republic of Vietnam”, “Vietnam in my heart”, “The Voice of the Fatherland” and “Believe in the Party” .

Some groups, like “Keeping company with Force 47” and “Roses of Force 47” were evident in their affiliation, while others – like “Pink Lotus” and a few groups that used local town names in their titles – were More subtle.

The messages varied in content, with many praising the Vietnamese army, founding leader Ho Chi Minh, or party leader Nguyen Phu Trong. Others showed screenshots of “misinformation” posted by other Facebook users, marked with a large red “X”.

“These developments in Vietnam are frightening and have spread with impunity,” said Dhevy Sivaprakasam, Asia-Pacific policy adviser at Internet rights group Access Now.

“We are seeing the creation of a reality where people are not safe to speak freely online and there is no concept of individual privacy.”

[PDF] What are the major major data next generation data storage Outlook 2021? – The current of the Manomet