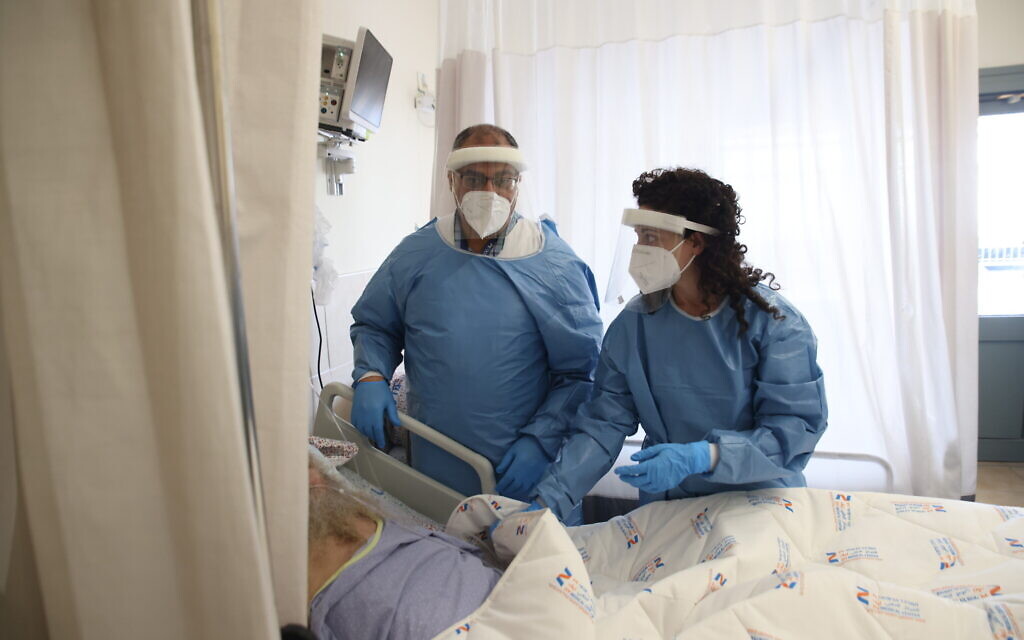 The number of patients hospitalized in Israel in serious condition as a result of COVID-19 continued to rise on Sunday, reaching 1,263, the highest number since the start of the pandemic, according to new Health Ministry data. .

The ministry said severe cases were much more common among the unvaccinated: among unvaccinated patients aged 60 and over, there were 415.6 severe cases per 100,000 people compared to 35.9 for their vaccinated counterparts.

Some 37,985 new cases of coronavirus were diagnosed on Saturday, with a test positivity rate of 28.79% – also the highest rate since the start of the pandemic. Experts say the true number of cases is likely much higher and testing is more limited on weekends. On Saturday, more than 146,000 PCR and antigen tests were carried out, compared to around 400,000 daily tests a week ago.

A total of 2,888 people have been hospitalized, including 366 in critical condition, according to ministry data.

The transmission rate (measuring the average number of people each infected person transmits the virus to) continued to decline, reaching a value of 0.86.

The transmission rate is based on data from 10 days earlier and any value below 1 indicates that the pandemic is waning. In December, the R-value jumped to 2.12, but has been falling ever since.

The death toll stood at 9,139, with at least 41 new deaths recorded over the weekend and revised data adding dozens more people who died in recent weeks. According to ministry data, 299 people have died from complications of COVID-19 in the past week.

On Sunday morning, coronavirus czar Salman Zarka told Kan public radio that the pandemic is currently stable in Israel, citing the low rate of transmission, but added ‘we haven’t reached the end of the wave of the virus’ .

However, starting Monday, Israelis will no longer have to flash their Green Passes – which show proof of vaccination, recovery or a recent negative COVID-19 test – to enter restaurants, cinemas, gyms and hotels.

Proof of a valid Green Pass will still be required upon entry to indoor venues where the risk of infection is higher, such as performance venues and dance clubs.

Health Ministry Director General Nachman Ash said the decision to scrap the Green Pass in most cases was due to its lack of “effectiveness”.

“Because Omicron also infects vaccinated people, the [Green] Pass has lost its effectiveness in most places and we have decided to limit its use to only high risk places. It’s part of the trend of living with the virus,” he told Army Radio.

The climate crisis and responsible journalism

As an environmental reporter for The Times of Israel, I try to convey the facts and science behind climate change and environmental degradation, explain – and critique – official policies affecting our future, and describe the Israeli technologies that can be part of the solution.

I am passionate about the natural world and discouraged by the dismal lack of awareness of environmental issues shown by most of the public and politicians in Israel.

I am proud to do my part to keep The Times of Israel readers properly informed on this vital subject – which can and does lead to policy change.

Your support, through your membership in The Times of Israel community, allows us to continue our important work. Would you like to join our community today?

Join the Times of Israel community Join our community Already a member? Log in to stop seeing this

Are you serious. We appreciate that!


We’re really glad you read X Articles from The Times of Israel over the past month.

That’s why we come to work every day – to provide discerning readers like you with unmissable coverage of Israel and the Jewish world.

So now we have a request. Unlike other media, we don’t have a paywall in place. But since the journalism we do is expensive, we invite readers to whom The Times of Israel has become important to help support our work by joining The Times of Israel community.

For just $6 a month, you can help support our quality journalism while benefiting from The Times of Israel WITHOUT ADVERTISINGas well as access to exclusive content available only to members of the Times of Israel community.