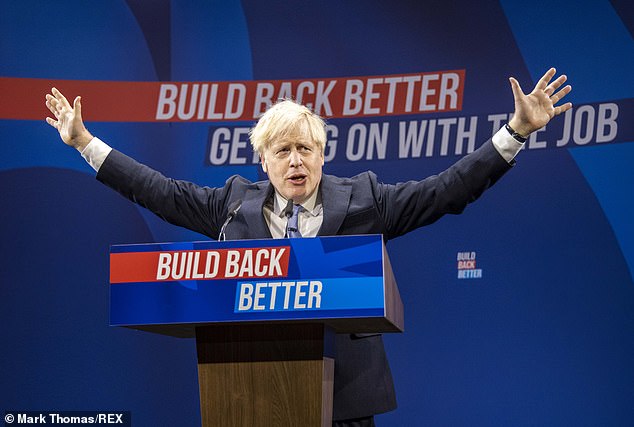 LORD SAINSBURY: We cannot continue in this race to the bottom, reducing labor wages

Many dismiss Boris Johnson’s vision of a high-productivity, high-wage Britain as some sort of gimmick. Even more boosterism to get him out of a difficult political period.

Still, I think his conference speech was important and could truly herald a new era of economic decision-making.

In the past, the UK government has too often viewed its job as keeping wages low so that low-quality goods and services can be sold cheaply in world markets.

It has never been a successful strategy.

And today, when many developing countries have learned to produce the same quality of products – but can sell them cheaper – it is simply a disaster.

Britain must begin to see itself in a ‘race to the top’, supplying world markets with attractive and innovative products.

Britain must begin to see itself in a ‘race to the top’, supplying world markets with attractive and innovative products. Pictured: Boris Johnson delivering his annual speech at the Conservative Party conference

We cannot continue in this race to the bottom, reducing labor wages forever in a desperate attempt to compete with developing countries.

While I applaud Boris’ feelings, it’s easier said than done, though. The reality is that we can only break with our slow growing economy if government and industry step up their game.

Nothing will be won if politicians and business continue to blame each other for our precarious situation.

We need companies like Apple and products like the iPhone that sell for higher prices around the world.

This will only happen if companies recruit highly qualified engineers and scientists and are willing to invest in them.

And if they bring a flow of new goods and services to the market – although that may, in some cases, mean getting ahead of their current products.

This will only happen, in other words, if UK companies put innovation and creative product design at the heart of their business.

The government, too, must play its part. And it can start by learning from abroad.

We need to understand that we live in a new, highly competitive world where rival countries devote considerable energy to successfully supporting development and innovation in their own industries.

China is an obvious example.

But what has Britain been up to recently? As always, we debated whether we shouldn’t even have an industrial strategy in the first place.

It is essential that we abandon the damaging idea that manufacturing is no longer important to Britain and that we can instead rely on the growth of financial services.

Remember that British research, design and engineering continue to produce high levels of productivity and wealth. Just look at our vaccines or the continued success of our aerospace industry.

Sadly, our decision to replace manufacturing activity with low productivity services – think call centers or Deliveroo – is the main reason we’ve had such a slow growth rate in recent years. .

Almost every other country understands that manufacturing is essential.

One of the reasons Singapore is the richest country in the world – excluding tax havens – is that while around 25% of its economy is devoted to high productivity financial services, it has deliberately ensured that 20% more of its economy remained in high-end manufacturing.

This contrasts with the UK and US, where only around 10% are in this crucial sector.

Second, the government must deliver on its stated support for science and innovation.

The government’s recent white paper on innovation said a lot of good things, but science and industry will be watching closely this fall’s spending review. Is the government seriously considering reaching 2.4 percent of GDP devoted to research and development, a modest target?

Third, the government must continue to overhaul the country’s technical education system.

Faced with the skills crisis in the country, we must accelerate the establishment of the new T-Levels, a new national system of technical qualifications understood by students and companies, and promote them, instead of pretending to we had all the time in the world to train the technicians and technologists our industry desperately needs.

Finally, the Prime Minister is right to say that leveling the poorest regions of the country must be a key element of the government’s strategy. But we have to be clear that regional inequalities are a long-standing problem that will not be easy to resolve.

We have had 90 years of policies aimed at stimulating growth in the regions, but the performance gap has widened during this period.

The historical context is important.

For a number of reasons, but mainly because of the presence of coal, the Industrial Revolution in the UK took place mainly in the north.

And the cities that gave birth to the Industrial Revolution, such as Sheffield, Manchester and Stoke-on-Trent, have come under intense competitive pressure from developing countries around the world in recent years.

The Prime Minister (pictured) appears to believe that by simply encouraging industry to pay higher wages, he will create a high productivity economy. Sadly, that’s not the way the world works

And where those jobs have been replaced, it is only low-paying jobs with poor prospects in call centers and distribution sheds.

It is important to understand this sad story because if we want to improve these neighborhoods, it will not be through cosmetic changes in our main streets or by training young people for jobs that do not exist in their neighborhoods.

We also need to understand that such a revival of our northern towns cannot be orchestrated by officials or politicians in Whitehall.

In the UK, the only people who can do this are regional mayors. We must give them additional powers in planning and continuing education, enabling them to carry out this vitally important task.

For mainly historical reasons, government R&D spending is heavily concentrated on poles of excellence in the south of the country.

But a part must be targeted on the less wealthy areas.

The Prime Minister seems to believe that by simply encouraging industry to pay higher wages, he will create a high productivity, high wage economy. Unfortunately, this is not how the world works.

If it worked, we would soon be a fabulously rich country and Germany would be nowhere.

Better productivity has to come first, and only then can we start paying higher wages.

Today we live in a highly competitive global economy – and Britain is taking a hit.

Matching our competition will not be easy, but it is the only option.

Who is eligible for a COVID-19 vaccine booster? What would you like to know

How to clean up junk files and folders that take up space on your PC.