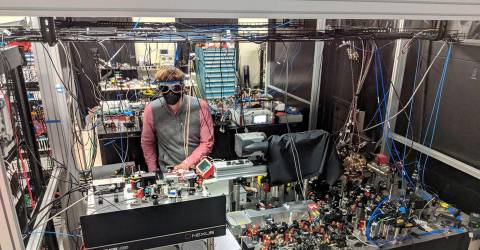 Malaysia must turn to quantum computing

TODAY The digital world has altered the physical reality of our lives in many ways, some more significant than others. Virtually everything in everyday life is now interconnected in a complex of cyberspaces and information and communications technology networks powered by broadband and data transmission via frequency signaling or wireless and cable/fiber , satellite, etc. (including 5G).

This gave rise to the fantasy of the “metaverse” (amalgamation of “meta” and “universe”) – an alternate reality – where humans interact with each other only through avatars, i.e. graphic icons 2D or 3D (dimensional) or role-playing/RPG-like models.

We can even push the metaphor further by postulating that the only thing that “separates” virtual reality from the “external” world circumscribed by time and space (geography) is the humble crystalline silicon used to produce the tiny microchips which are the basis of digital. Technology.

The remarkable speed at which the digital world is advancing has given us what is known as quantum computing.

Based on the logic of quantum physics, quantum computing exploits and deploys the principles of superposition (simultaneity of several states at a given time and in a given space) and entanglement (co-dependence of existence) and so on. suite, to perform very complex tasks that conventional computers are generally limited due to the binary digits (bits) of 0 and 1 arranged in opposition to each other, i.e. either/or (dualism), i.e. 0.1.

In turn, dialectical logic is rooted in Western philosophy (embodied eminently by the Aristotelian logic of the law of the excluded middle, the law of identity and the law of non-contradiction and mediated by medieval scholasticism and inherited from the Enlightenment, and so on, with examples like Boolean algebra). In short, the distinction is opposition.

Bits are the smallest and most basic unit and value (form) of data and information that a computer stores and processes.

Simply put, bits are the fundamental, rudimentary alphabets of computer language for hardware (as opposed to computer/scripting language for software, i.e. programming).

What separates the foundations of quantum computing from conventional computing is the way the binary digits (bits) are arranged.

That is, we can now use 0, 1, or anything in between to represent a qubit (a unit of information) – which opens the door to huge/incredible implications in computing.

Continuous developments in quantum computing over the past few years have led to remarkable breakthrough in many areas that have enhanced the dynamism of current technological systems.

To appreciate the scope of quantum computing, this “new generation of technology involves a type of computer 158 million times faster than the most sophisticated supercomputer we have in the world today. It’s a device so powerful it could do in four minutes what it would take a traditional supercomputer 10,000 years to accomplish.”

Additionally, it is estimated that a potential quantum computer, such as a 4099-qubit computer, would only need 10 seconds to crack a Rivest-Shamir-Adleman (RSA) cipher (one of the encryption algorithms most secure in the world).

In contrast, conventional computers would need 300 trillion years to do so.

No quantum computer has yet reached this stage, but increased investment and extensive research coupled with strong political will would shorten the time needed for such development to fully materialize.

To take advantage of these possibilities, many countries, especially major powers such as the United States and China, have embarked on a race to achieve (unmatched) quantum supremacy due to the growing awareness of its considerable impact on geopolitics and geoeconomics.

The quantum sector is expected to become a multi-billion dollar industry over the next ten years.

Quantum computing is expected to capture around US$700 billion (RM3.3 trillion) in value as early as 2035, with the market estimated at over US$90 billion per year by 2040.

For this reason, the US Department of Energy has supported and heavily funded the five National Quantum Information Science Research Centers (NQISRCs) since 2020 to set the stage for future quantum science discoveries. The NQISRC includes approximately 70 institutions across the United States.

Rival China also successfully developed its first-ever quantum computer, dubbed “Qianshi”, which is made available to the public and overtook Google in quantum supremacy last year.

Our closest neighbour, Singapore, is stepping up its investments in quantum computing and collaborating with various non-state and state actors (notably with Finland).

Singapore is, of course, leading the way in the region, with the National Quantum Computing Hub poised to develop the components and materials needed to build quantum computers and devices.

During the 2018 edition of the World Islamic Economic Forum (WIEF) entitled “Global Discourse on Quantum Computing”, Tun Musa Hitam (former President of WIEF) remarked that North America could lead the way in terms of research in this area, but Malaysia can still aspire to play a role and have a stake in development and progress.

Is our country ready to take up the challenge?

According to the Managing Director of (IBM) Malaysia, Catherine Lian, Malaysia must prepare to adopt quantum computing technology so that it is not left behind, including in terms of responding to the ever-evolving cyber threats that are an integral part of the comprehensive national security, affecting everything from food, water and energy security to even “remote” areas such as the stock exchange (securities market) in terms of, for example, trading platforms and flows of data affecting intra-day volume alongside misconduct such as insider trading, etc.

Not only that. As it stands, quantum computing will enable us to definitively address and resolve critical issues related to our levels of self-sufficiency to redress our balance of payments deficits in food imports and promote a chain supply and logistics more integrated and aggregated because it is able to process very complex logistics, real-time algorithms, among others.

Quantum computing can be critical in providing us with holistic, out-of-the-box solutions to the horizon of risks and challenges we face, such as the link between climate change resilience and sustainable resource management practices. floods.

It also means that we don’t have to rely too heavily on outside help and assistance to chart our digital course and blueprint, and that we can be “protected” against any geopolitical quantum supremacy that seeks to pit bloc against bloc. the other (when we have achieved some measure of self-sufficiency in quantum computing).

Quantum computing would therefore be at the heart of our quest for digital sovereignty.

To this end, EMIR Research wishes to offer some policy recommendations as part of promoting a national master plan and roadmap for quantum computing:

A specially targeted National Quantum Computing Master Plan and Roadmap would bring together, incorporate and further develop pre-existing policies such as the Malaysian Artificial Intelligence (AI) Roadmap (2021-2025), the Malaysian Strategy for cybersecurity (MCSS) 2020-2024, and the Malaysia Digital Economy Blueprint – whose objective is the convergence and integration of AI and quantum computing.

AI is simply the algorithms and models that could be transplanted into qubit-driven quantum computing.

Combining and “synchronizing” will further speed up the process and development of specific AI settings.

This by allowing AI to break out of the conventional bit-driven computing framework.

The logic of quantum physics (unlike Aristotelian/Boolean logic) would normalize and regularize in AI, as part of quantum computing.

In turn, our AI can then achieve the status of Artificial Superintelligence, capable of going beyond human intelligence.

On the other hand, the potential of quantum computing to perform and solve highly complex problems will be increased accordingly and take the role of machine learning to a higher level.

This is where human intelligence can be recreated as part of quantum computing. AI can help transform cyberspace into a quantum communication network.

For example, when small quantum processors instantly transfer quantum data (travelling even faster than the speed of light), this can be done without optical fibers or manual (i.e. human) manipulation.

Finally, it is very important that the National Master Plan and Roadmap for Quantum Computing also “internalizes” the Input-Output-Outcome-Impact model so that the resources deployed achieve the intended results optimally/maximally in the long term. term (including sustained private sector investment).

In conclusion, quantum computing is a promising field in which we cannot afford to be left behind when the time comes.

After all, the global quantum race may well be just another zero-sum geopolitical and geotechnological game that Malaysia must be well prepared to manage, adapt and follow.

$4 billion+ by 2028, automated storage and retrieval