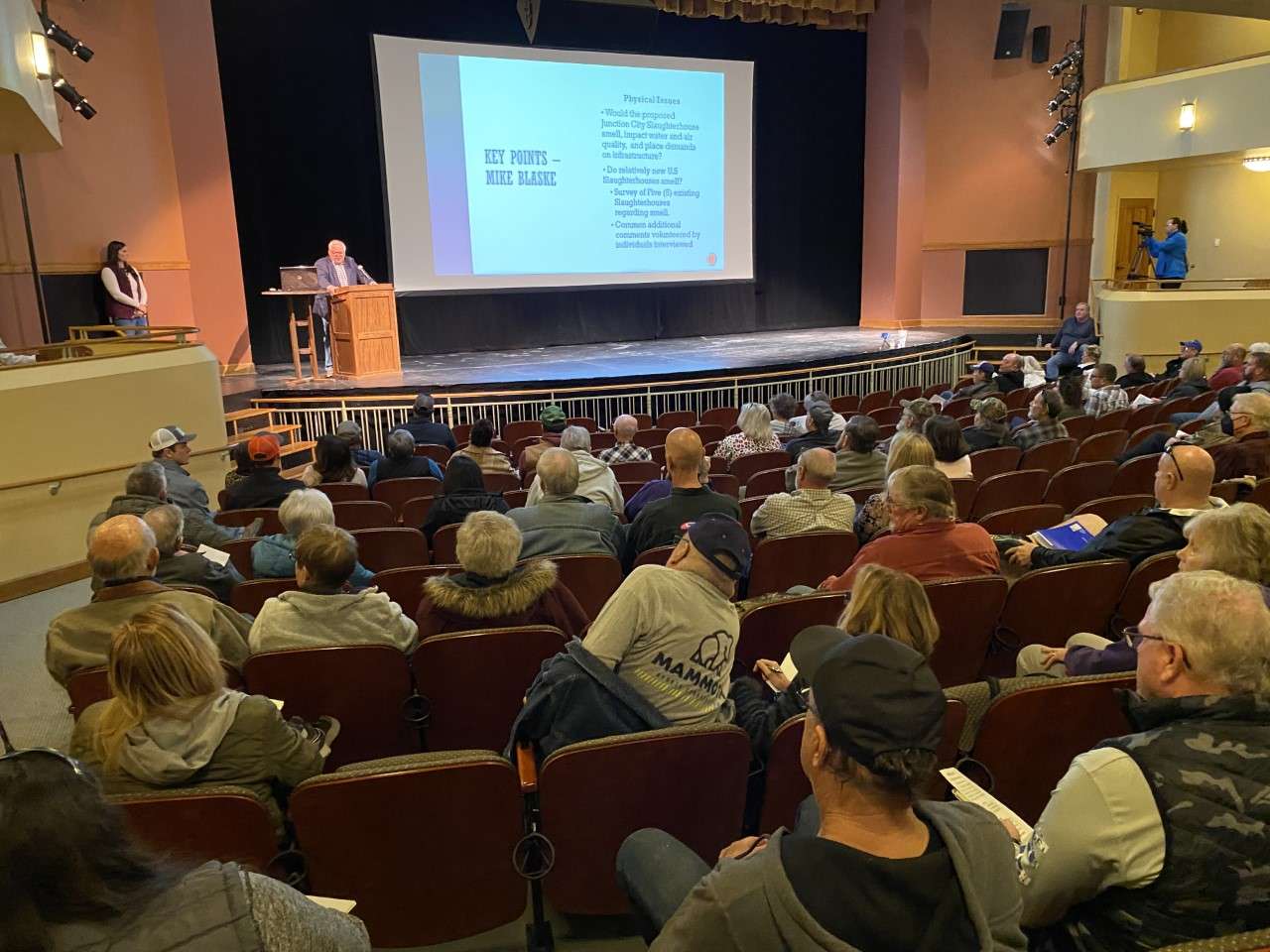 The question of what a live beef processing plant would mean for Geary County was explored at a public meeting Saturday at the CL Hoover Opera House. It was organized by Concerned Citizens for Sensible Economic Development With Open Communications, which opposes the project. There was a large turnout at the event where expert speakers who researched the topic spoke, and the audience was allowed to ask questions and offer their input.

Here are some of the facts presented for the proposed factory following research by retired architect Mike Blaske.

–There would be 300 employees.

–160 million gallons of water would be needed per year.

–There would be large-scale truck traffic, with each truck carrying about 40 head of cattle.

–Bones and animal waste should also be removed.

–Water and air pollution could occur.

–This would not be considered a particularly large plant.

A keynote speaker, Don Stull, mentioned the Foote Cattle Company as the entity considering this project. No final decision has been made on his prosecution.

Blaske said, “I think it’s something that needs a lot of thought before a facility like this is introduced into our community.”

Blaske said there have been attempts to pose the question of how this facility will address the issues listed and the only answer received is that there is new technology. It was unclear if it was working or if it was in place anywhere in a slaughterhouse where it could be checked.

Blaske noted that the concerned citizens’ group is a bit frustrated that they haven’t had open communication. Non-disclosure agreements have been signed by local leaders prohibiting them from talking about the project. Blaske asked for better information. He also commented that he didn’t understand putting a packing plant in the middle of the westward growth in Junction City. The proposed location is just north of I-70 and would be at the southwest end of town.

On the subject of smell, Blaske contacted five slaughterhouses and businesses in their communities where he gathered opinions about a facility’s smell both pros and cons, ranging from odors to needing jobs. There was voluntary information that local townspeople are no longer the workforce of these slaughterhouses. The hourly wage was quite good and the interior of the slaughterhouses was not pretty. There was a huge turnover of employees the first two or three years. He also noted that he learned that slaughterhouses are not good neighbors and should not be located in or near a city, but rather belong to isolated locations away from a city. The new workers were also transient non-English speaking people, in many cases this led to crime, and this is a problem for the hospitals because when they treat the workers, the hospitals are not reimbursed.

Don Stull, a retired KU professor of anthropology, has researched the meat and poultry industry in several communities in three states and across Canada. “In most cases, the choice to locate a packing plant was made by state and local authorities before the general public even knew their city was under consideration. Residents of Junction City are fortunate to be able to consider the consequences of the proposed meat plant and express their views before the final decision is made.”

Stull said line work in a packing plant is physically demanding, dangerous, speaking English, having a high school diploma or having previous work experience is not necessary to work in a packaging plant. “It helps explain why the meat and poultry industry is heavily dependent on immigrants and refugees.” He added that the low wages and unpleasant working conditions encourage turnover, that the roads and highways are more busy and that this plant would be much smaller than others, for example in Dodge City or Garden City.

Stull noted, “There are many things the citizens and leaders of Junction City need to know before they can make an informed decision about whether to support or oppose the proposed packaging plant. ” Information is needed on topics ranging from potential sources of labor, wages, support the company will provide to the community, tax abatements and other concessions the company may request from Junction City and Geary County.

Questions from the audience ranged from opposition to low wages to a desire for city and county leaders to consider quality of life issues and be more transparent with the community. There was a comment about negativity, noting that a lot of things were biased. There was a positive reference to OSHA that 97% of meatpacking plants are insured, they have 401Ks and language courses.

A comment mentioned that Junction City was not a big business or corporation friendly place. Another was that everyone should do their homework and put the proposal to a vote. It was asked how the city would meet water and waste disposal needs. It has also been observed that, in general, property values ​​decrease the closer one gets to a slaughterhouse or feed yard.

There were petitions in the lobby of the Opera and signs available in the courtyard to be distributed to those who opposed the project. About 200 people attended the meeting.

NCI’s Gadi supercomputer will get a storage upgrade – Cloud – Hardware