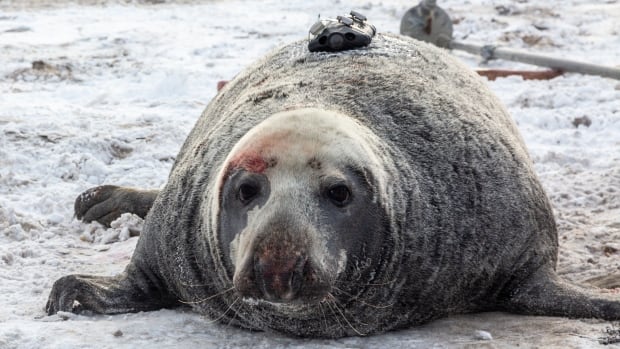 Scientists in Halifax have recovered a treasure trove of research data lost from the ocean floor off Nova Scotia for three and a half years.

The remarkable recovery includes 19 hours of video from a camera attached to a gray seal that was lost in 2018 and dragged in fishing gear this summer.

â€œI was shocked, absolutely shocked,â€ said Damian Lidgard, a biologist for the Department of Fisheries and Oceans.

Not only did they get the camera back, it is still working and will be redeployed next month.

Lidgard had attached the device to a young male gray seal on Sable Island on December 31, 2017.

He was hoping to see the male disembark where he could easily retrieve the camera and another built-in sensor that records dive depth, temperature, acceleration and other data.

â€œBasically for the next three or four weeks, every day, I searched Sable for this man and never found him,â€ Lidgard said.

The device probably fell out of the seal when it molted in the spring.

Where are they going? What are they eating?

The $ 10,000 camera was deployed as part of an Ocean Tracking Network research project to track the movements of gray seals at the giant colony of Sable Island. Scientists want to know where they are going and what they are eating.

The instrument was reportedly lost until this summer, when it was recovered from the ocean floor by Arctic Endurance, a Clearwater Seafoods vessel fishing for clams on Banquereau Bank.

Clearwater’s clam team made the discovery

The company contacted Lidgard to ask if this was part of their research project. An Arctic Endurance crew member brought it ashore and handed it over to Lidgard.

â€œThere were a few marks on the camera, but in general it was in great condition,â€ he said. “My first impression was that he survived remarkably well, being at the bottom of the sea.”

The camera was returned to Australia where the company downloaded data from its memory storage card.

â€œI didn’t really have much hope that there was anything out there, but I had a full set of data,â€ Lidgard said, noting that there were 59 20-minute videos on the storage card.

Lidgard received the video a few weeks ago and is still watching it.

One of the high-resolution videos shows the male seal diving, foraging for food and chasing females on the surface in January 2018. Exxon’s natural gas production platform at Sable is visible in the distance.

Did you know that seals sleep on the bottom of the ocean?

The video is still being verified for one of the more notable behaviors revealed by other gray seal cameras off Sable: sleeping on the ocean floor and riding with the current.

The video provides information not available from other sensors.

â€œThe diving profile of a sleeping seal looks like a U shape,â€ Lidgard said. â€œThe seal goes down to the bottom, spends time at the bottom, then comes back to the surface.

â€œWell, it’s a remarkably similar dive profile to a foraging seal. So without video you can’t tell if you see him foraging for food or if the seal is sleeping. But now we can rely on this video footage. “

He said a previous video showed a seal sleeping for 16 minutes at the bottom of the sea at a depth of 120 meters. The heart rate slows down to a few beats per minute, a nap in deep water on fishing grounds can be over 100 kilometers from Sable.

Lidgard said researchers previously interpreted behavior based on numbers from satellite transmitters and time and depth recorders. They watched how deep the seal dived and how long it dived.

â€œWith the video camera, I can sit at my desk and watch this animal at sea, behave, dive deep, look for food, hunt females,â€ he said. “I don’t have to make assumptions about what the seal is doing.”

Covid-19 tracker: the numbers are rising, the masks are falling