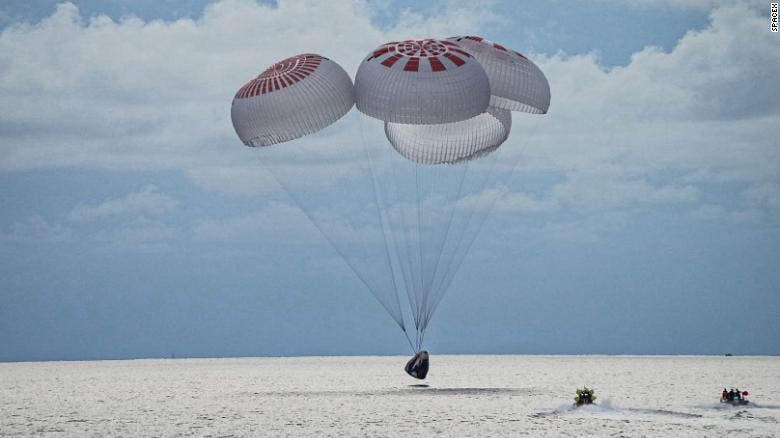 Four amateur astronauts returned to Earth after a three-day space excursion aboard the SpaceX Crew Dragon capsule, the first flight to Earth orbit entirely carried out by tourists. The mission launch and return are the latest recent expeditions funded by billionaire passengers and mark a milestone in the nascent astrotourism industry.

After an automated re-entry into Earth’s atmosphere, the group of unlikely astronauts that made up the SpaceX Inspiration4 mission splashed safely in the Atlantic near the Florida coast last Saturday night. The parachutes slowed the descent of the capsule before landing in the water, where SpaceX ships awaited its recovery.

The crew members were seen emerging from the capsule, visibly happy after the experience. They stood on the deck of a SpaceX salvage ship, waved and lifted their feet before being taken to a medical station for checkups. Then they were returned by helicopter to Cape Canaveral, where they were received by their families.

SpaceX, the spacecraft and rocket manufacturing company owned by billionaire Elon Musk, supplied the spacecraft used for the mission, controlled the flight, and handled the recovery of the capsule. The mission was funded by Jared Isaacman, an e-commerce entrepreneur, who paid for the four seats and was also the crew commander.

Isaacman was joined by three foreigners he selected: geoscientist Sian Proctor, medical assistant Hayley Arceneaux and Air Force veteran Chris Sembroski. The mission was designed to raise awareness and donate for St. Jude Children’s Research Hospital, which fights childhood cancer and other deadly diseases. So far $ 160 million has been raised, including $ 100 million donated by Isaacman.

During the mission, crew members chat with their families, take in the stunning views from space, and listen to music. During a live broadcast on Friday, Proctor showed artwork he made during his stay with metal markers, while Sembroski played a ukulele soon to be auctioned off to raise additional funds for St. Jude Hospital.

A new era for spaceflight

The mission was not intended to approach the International Space Station (ISS) but rather to perform a “free flight” at an altitude of 575 kilometers (360 miles). The crew circled the earth more than 15 times a day. During the trip, experts collected data on all of their vital signs to study the impact of space travel on non-professionals.

SpaceX chief human spaceflight Benji Reed said the flight went without major inconvenience. He mentioned two minor and easily fixed issues, a faulty fan in the toilet system, as well as a faulty temperature sensor. All four astronauts had levels of vertigo and motion sickness similar to those of NASA astronauts, he added, raising intriguing questions about the future of space travel.

It was the third private space flight so far this summer, following the flights of Jeff Bezos on a Blue Origin spacecraft and Richard Branson on a Virgin Galactic. Yet Inspiration4 was the first mission to orbit the planet. Four more private orbital missions are planned over the next year, including new ones from Elon Musk’s SpaceX.

Mission director Todd Ericson told a press conference “welcome to the second space age”, saying that after this mission space travel will become “much more accessible to humans. and average women “. Still, it will likely take some time, with Time magazine estimating that Isaacman paid around $ 200 million for the four seats on the recent mission.