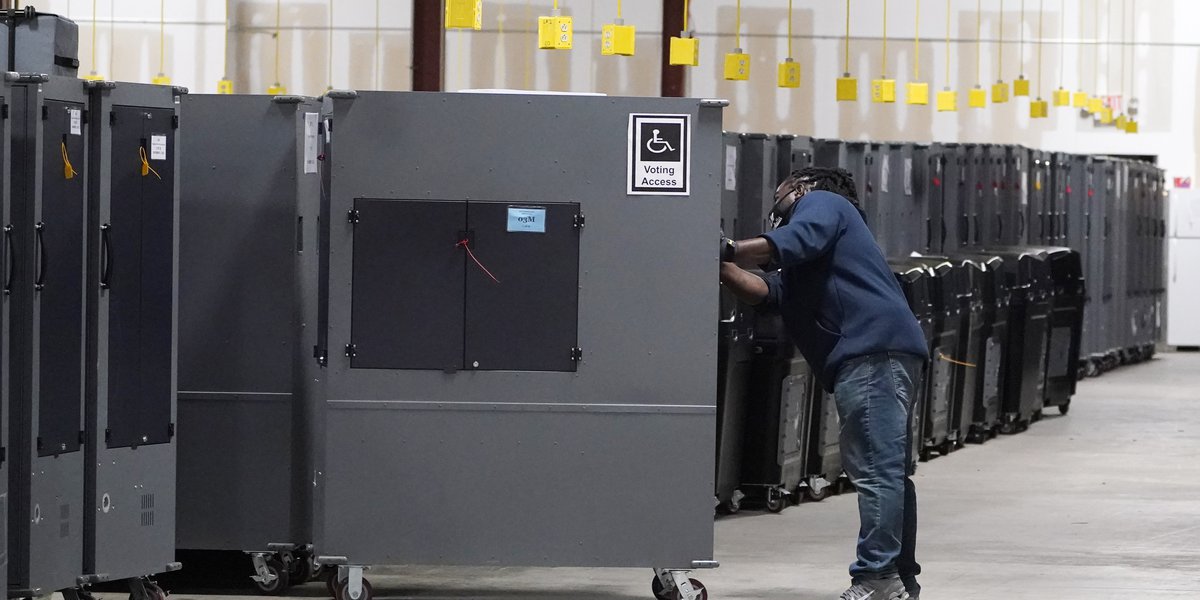 ATLANTA (AP) — Sensitive voting system passwords posted online. Copies of the confidential voting software can be downloaded. Skinning machines inspected by people not supposed to have access to them.

The list of alleged security breaches at local election offices since the 2020 election continues to grow, with investigations underway in at least three states – Colorado, Georgia and Michigan. The stakes seemed to rise this week when the existence of a federal investigation involving a prominent loyalist of former President Donald Trump who promoted conspiracy theories about voting machines across the country.

While much remains unknown about the investigations, one of the most pressing questions is what all of this could mean for the safety of voting machines with the midterm elections less than two months away.

Election security experts say the breaches by themselves did not necessarily increase threats to the November vote. Election officials already assume that hostile foreign governments could hold the sensitive data, so they are taking precautions to protect their voting systems.

The most immediate concern is the possibility that rogue election workersincluding those who sympathize with lies about the 2020 presidential election, could use their access to election materials and the knowledge gained from the breaches to launch an attack from the inside. This could be intended to gain an advantage for the desired candidate or party, or to introduce system problems that would further sow distrust in the election results.

In some of the alleged security breaches, authorities are investigating whether local officials provided unauthorized access to people who copied software and hard drive data and, in several cases, shared it publicly.

After the breach in georgia, a group of election security experts said the unauthorized copying and sharing of rural Coffee County election data posed “serious threats” to the November election. They urged the state electoral board to replace touchscreen devices used statewide and use only hand-marked paper ballots.

A 2020 election voting machine was somehow sold by a Goodwill store. (Source: CNN/KVRR/GETTY/GOODWILL)

Harri Hursti, a leading vote security expert, expressed concern about another use of hacked data. Access to voting equipment data or software can be used to develop a realistic video in which someone claims to have manipulated a voting system, he said.

Such a fake video posted online or on social media on or after Election Day could create chaos for an election office and cause voters to challenge the accuracy of the results.

There is no indication that the voting machines were tampered with, either during the 2020 election or in this year’s primaries. But conspiracy theories widely promoted among some conservatives have led to calls to replace machines with ballots marked and counted by hand and raised concerns that they could be targeted by people working in electoral offices or at polling stations.

The alleged offenses appear to be orchestrated or encouraged by people who falsely claiming that the 2020 election was stolen of Trump. In several of the cases, employees of local election offices or election commissions gave access to the voting systems to people who were not authorized to do so. The incidents came into public view after Mesa County, Colorado’s voting system passwords were posted online, sparking a local investigation and successful effort. to replace the county clerk to supervise the elections.

MyPillow CEO Mike Lindell, who has hosted or attended forums around US voting machine conspiracy theories, said this week he received a subpoena from a federal grand jury investigating the violation in Colorado and that he had been ordered to turn over his cell phone to the FBI. officers who approached him at a fast food joint in Minnesota.

“And they told me not to tell anyone,” Lindell said in a video afterwards. “Okay, I won’t. But I am.”

Lindell and others have traveled the country over the past year, hosting events where attendees are told that voting machines have been tampered with, officials are being “selected” rather than elected, and widespread fraud. cost Trump the 2020 election.

In an interview with the Minneapolis Star Tribune, Lindell said FBI agents questioned him about the Colorado breach and Dominion Voting Systems. The company provides voting equipment used in about 30 states and its machines have been targeted in breaches in Colorado, Georgia and Michigan.

When agents asked him why he was flying between different states, Linden told them, “I go to attorneys general and politicians, and I try to get them to get rid of these voting machines in our country.”

The Justice Department did not respond when asked for details of its investigation.

Dominion sued Lindell and others, accusing them of defamation. In a statement this week, the company said it would not comment on ongoing investigations, but said its systems were secure. He noted that no credible evidence has been provided to show that his machines “did anything other than accurately and reliably count votes in all states.”

The scope of the federal grand jury’s investigation in Colorado is not known, but local authorities accused Mesa County Clerk Tina Peters in what they described as a “deceptive scheme designed to sway officials, violate security protocols, override authorized access to voting materials, and trigger potential distribution of confidential information to unauthorized individuals.”

Peters pleaded not guilty and said she had the authority to investigate concerns that voting materials had been tampered with. She has appeared at numerous events with Lindell over the past year, including Lindell’s “cybersymposium” last August at which a digital copy of the Mesa County Election Management System was distributed.

David Becker, a former attorney for the US Department of Justice who now directs the Center for Election Innovation & Research, notes the irony of those raising the alarm about the involvement of voting equipment in alleged violations of the same systems.