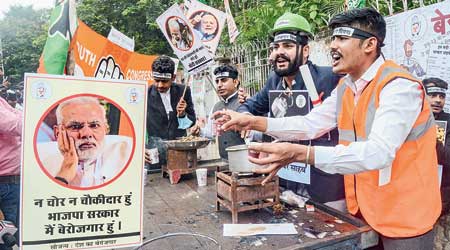 The party organized massive protests in many states where slogans such as “Narendra Modi sharm karo” accompanied banners and posters about the jobs crisis.

On Friday, Congress questioned why Prime Minister Narendra Modi’s birthday should be celebrated – unemployment, destruction of democracy, or sale of national assets to friendly capitalists.

Although Modi’s birthday was also celebrated as “Unemployment Day” by the Youth Congress last year, the party had avoided using the occasion for a political war despite its irreconcilable differences with the BJP. .

But with the BJP pulling out all the stops on Friday to use Modi’s birthday to try to undo the damage done to the Prime Minister’s image in the pandemic, Congress didn’t do well either.

Rahul Gandhi stuck to the usual morning birthday wish, but then tweeted: “There would have been no need for National Unemployment Day if the BJP was working for people, not for friends.”

Congress held a press conference in which spokesperson Supriya Shrinate said: â€œUnemployment Day is celebrated today by young people across the country; it’s a Twitter trend unmatched since morning. Women celebrate Prime Minister’s birthday as â€œMehngai Diwasâ€ and farmers as â€œKisan-Virodhiâ€ day. There are other achievements of the Prime Minister, which we cannot forget either: India is on sale and democracy is under attack. We could also observe the day as â€œCovid Mismanagement Dayâ€ or â€œED Income Tax Raid Dayâ€. These issues are Modi’s legacy.

The party organized massive protests in many states where slogans such as “Narendra Modi sharm karo” accompanied banners and posters about the jobs crisis.

The Youth Congress joined the call to observe September 17 as “National Unemployment Day”, lending its strength to the campaign on social media. The Youth Congress not only changed its profile picture on Twitter to amplify the ‘National Unemployment Day’ message, but also released hundreds of videos and posts with employment data to ensure the topic was covered. trending around the world all day long with millions of tweets. Congress Mahila worked separately to highlight the weight of inflation, focusing on the prices of petroleum products and edible oil.

The Youth Congress helped by selling pakoda and sabji-bhaji in several places and shining shoes in markets to highlight the scourge of unemployment.

Posts posted on social media pointed out that engineers and graduates were applying for peon positions and that appointments were not made to government jobs despite selection.

Shrinate said: â€œEvery Prime Minister is known for something. We have to look at Modi’s accomplishments as prime minister over the past seven years and what comes to mind is unemployment, cruelty to farmers, high commodity prices – with gasoline being sold. at over Rs 100 and edible oil at Rs 200 more, with India on sale in the name of asset monetization, wreaking havoc on people’s lives through mismanagement and manipulation of Covid data , attacks on democratic institutions and raids on rivals and critics by central agencies. “

Asking the prime minister to worry about governance rather than handling the headlines, Shrinate said: “Instead of keeping his promise to create two million jobs every year, his policies have resulted in thousands jobs are disappearing every month. “